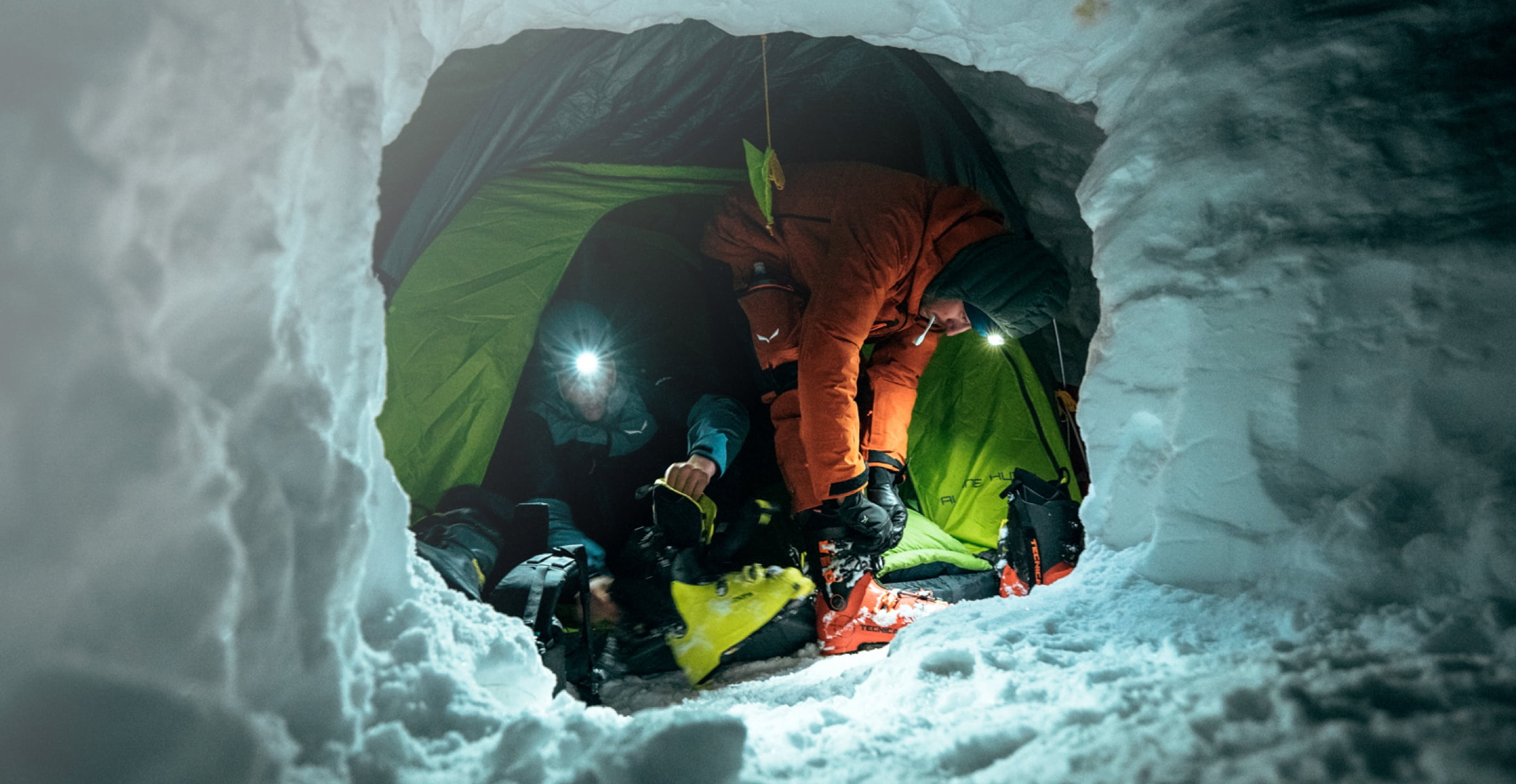 January 2021. It’s not that cold: minus ten. It is a milder night compared to the peaks of minus twenty-five that scratched the sunburnt and wind-scorched skin of their faces.

Time has passed quickly, like the other days: skins, skiing, more skins, more skiing. And then to take the water that inexplicably, flows under the snow, even at minus twenty, to slowly warm the cylinder in a bain marie, which thus, manages to release all its power to cook on the other fire of the stove.

A little soup and kaminwurzen, smoked salamini, for munching with phlegm, like a cigar in front of the fireplace. An evening wrapped in a sleeping bag to remember the most beautiful curves and bends and then suddenly that fog that envelops you and transports you to the deepest sleep after a day on which you’ve given everything.

Aaron and Matthias zip-up their sleeping bags, which have been tested at the most freezing temperatures. If you don't put something inside first to warm it up, in forces the cold and there is no other solution to warm them up other than with the heat of your own body. Or to put something hot in it first, like the hot water bottle that Aaron stole from his son or the round aluminum flask that Matthias used when he was a child, the kind that you could also cover with a loden case. 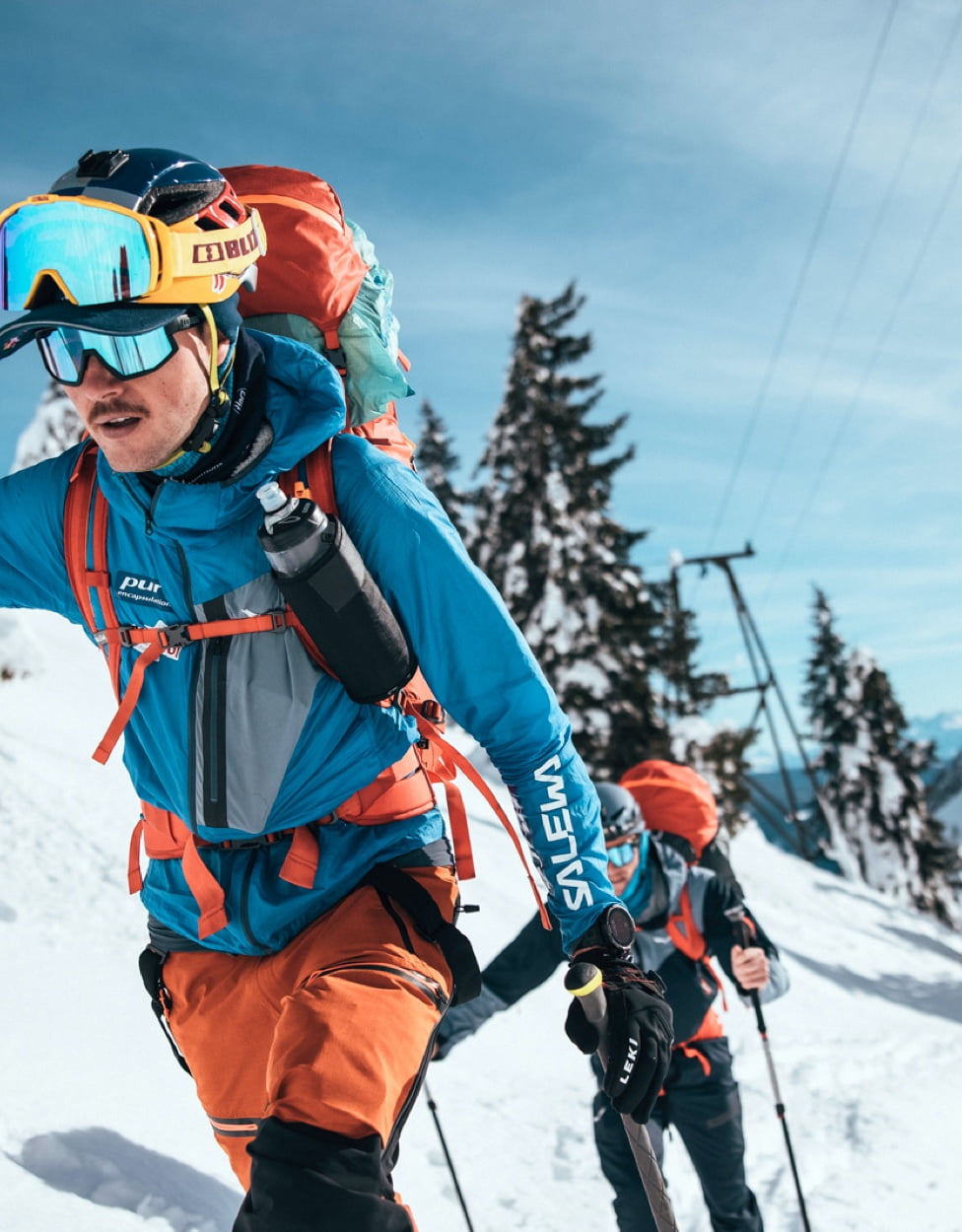 Dreams quickly follow each other, one after the other, in Aaron's mind. Then the barely risen sun, forcefully pierces through the door of the tent. A yawn, and a hand out of the sleeping bag. On the ground there is a thick layer of ice. "What happened, did the water fall?" he asks Matthias with an ever-hoarse voice.

"Last night the camel-bag that I had with me in my sleeping bag broke," Matthias replies impassively. That water bag that he puts in his backpack during the day and that he keeps in the bag at night to keep the water at an acceptable temperature and to drink from, from time to time, has given way. All night remaining motionless and soaked. With the doubt of whether to get up and go down to the valley. Interminable hours between the words of a story, flowing like a flash with comic accents, but taking on the appearance of a live tragedy. 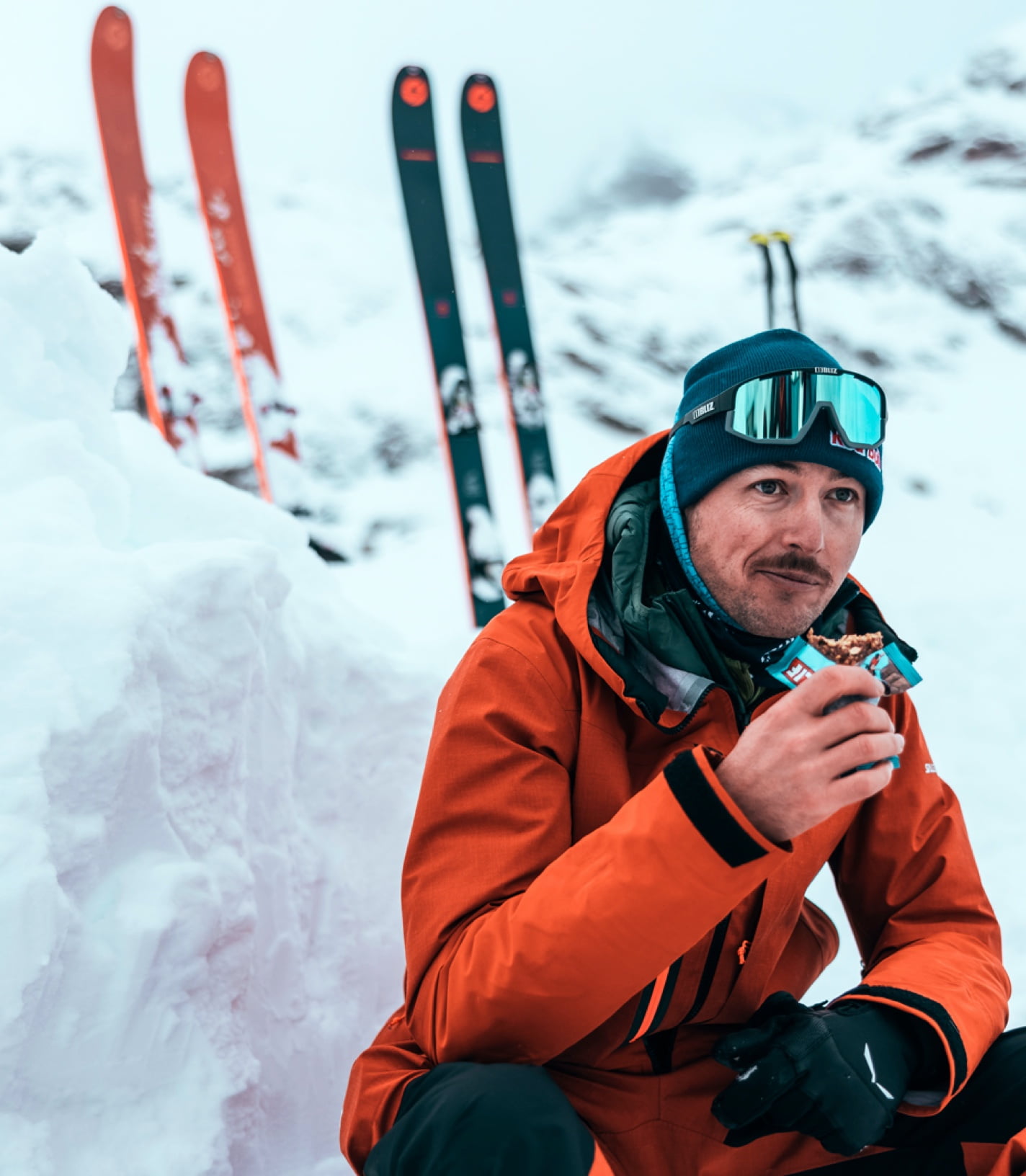 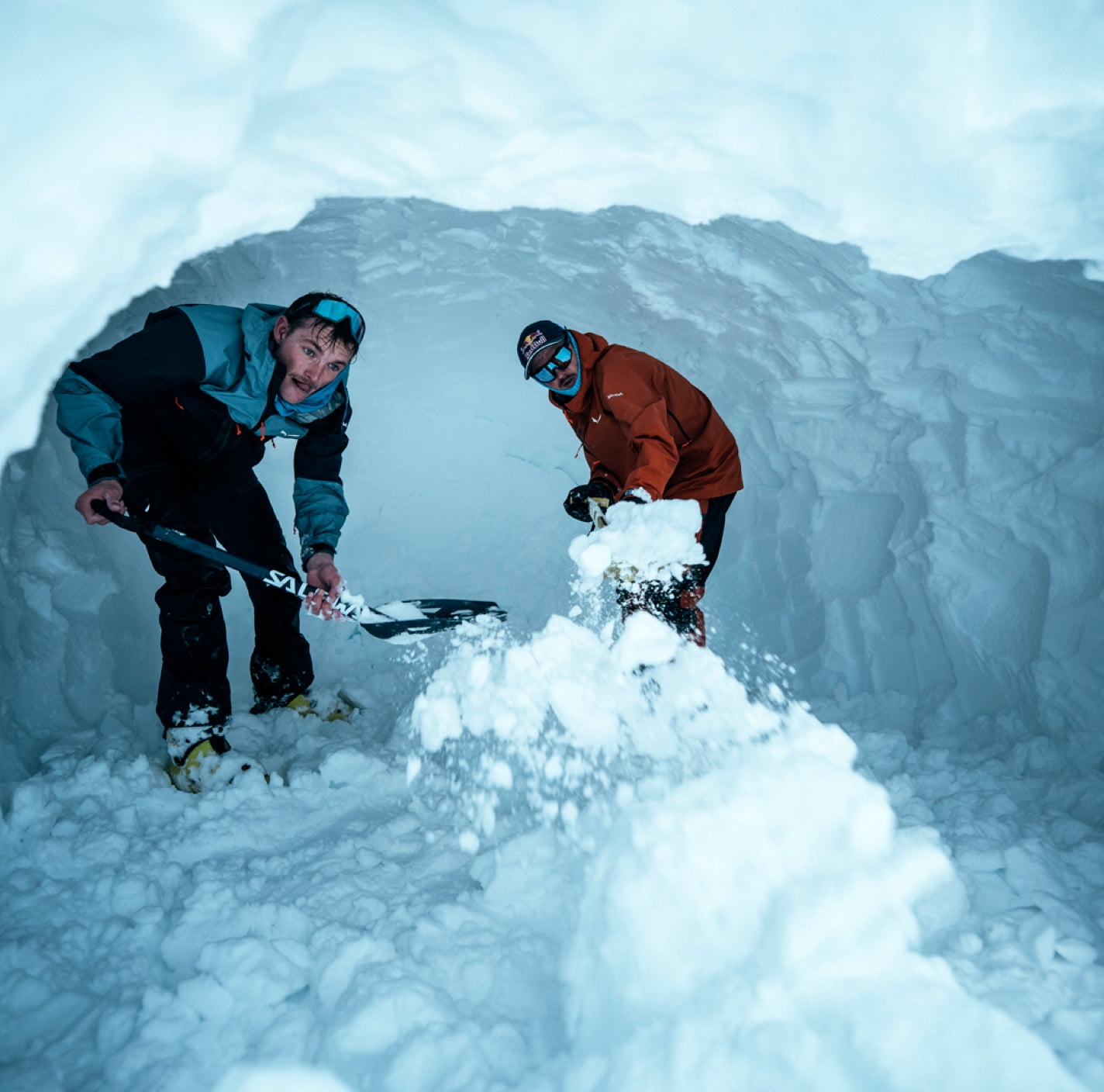 Flashback. April 2020. Under the duvet, with the cheeks buried in a soft pillow and the back resting on a thick mattress, the sensation is very different from that of a few centimetres of air-filled mattress, a sleeping bag and an inflatable pillow.

Yet it is nice to feel the cold air on your face, to see the sun rise from the door of the tent, to melt the snow with the stove for breakfast. And then put the skins out of the door and set out to discover infinite routes.

Aaron is half asleep, he still has the emotions of the last exit in his eyes. Departure when it was dark in the valley, a bit of portage, then up with the skins. And finally a night in a tent, to make the most of that precious freedom in the heart of a pandemic.

It is not an escape from the law because this is Aaron's job, but there is that adrenaline that only transgression can give you. That same adrenaline that rose in his veins when, as a boy, he trained in Merano 2000 and looked up towards the crests of the Ivigna, where his uncle Renato Reali had met Heini Holzer, who then skied that wall, and dreamed of putting the blades in that tangle of rock and snow.

With his eyes already closed but his mind still connected, Aaron begins to think about winter 2021. It is not known if he will be able to travel, everything is still uncertain. Up there, right above the house, just above the buzz of Merano, it seems to be in Patagonia. The contrast between down and up is between the developed world and the wild one, within a few kilometres. Or a paragliding flight. It would be nice to recreate the sensations of expeditions in the most remote corners, a stone's throw from your bed and your family.

Please accept marketing-cookies to watch this video.
November 2021. They pedaled for a while. Just a little, because the snow has come down to the bottom. So with the e-bikes they managed to climb just a few bends, let's say from the 300 metres of Merano up to an altitude of 600.

There is a lockdown and Aaron and Matthias, even if they could move by car, since they are doing their job, have decided to move only by alternative means, which is where the bikes come in. You have to go up to 2,100 metres and the two wheels soon give way to hides. 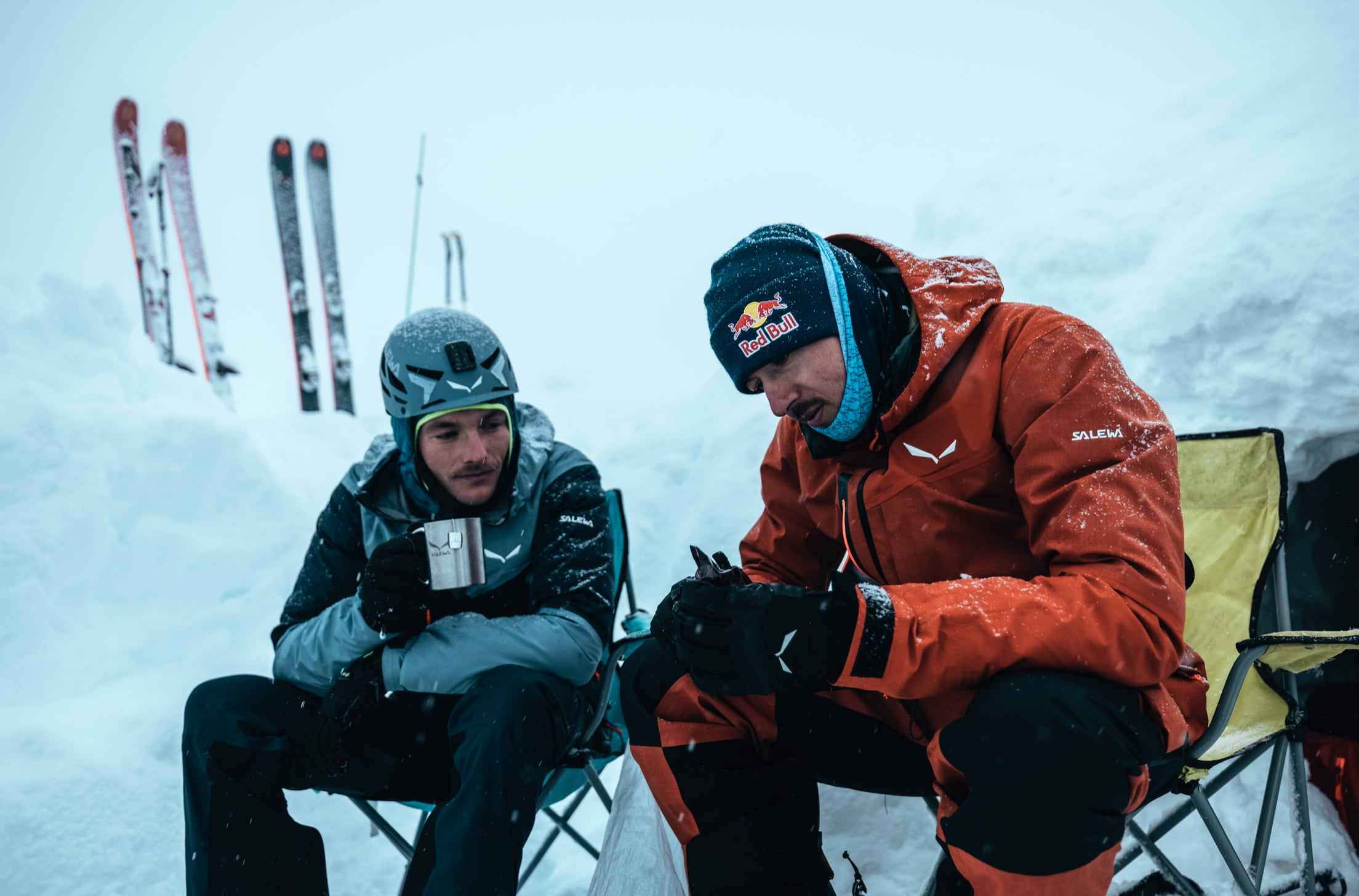 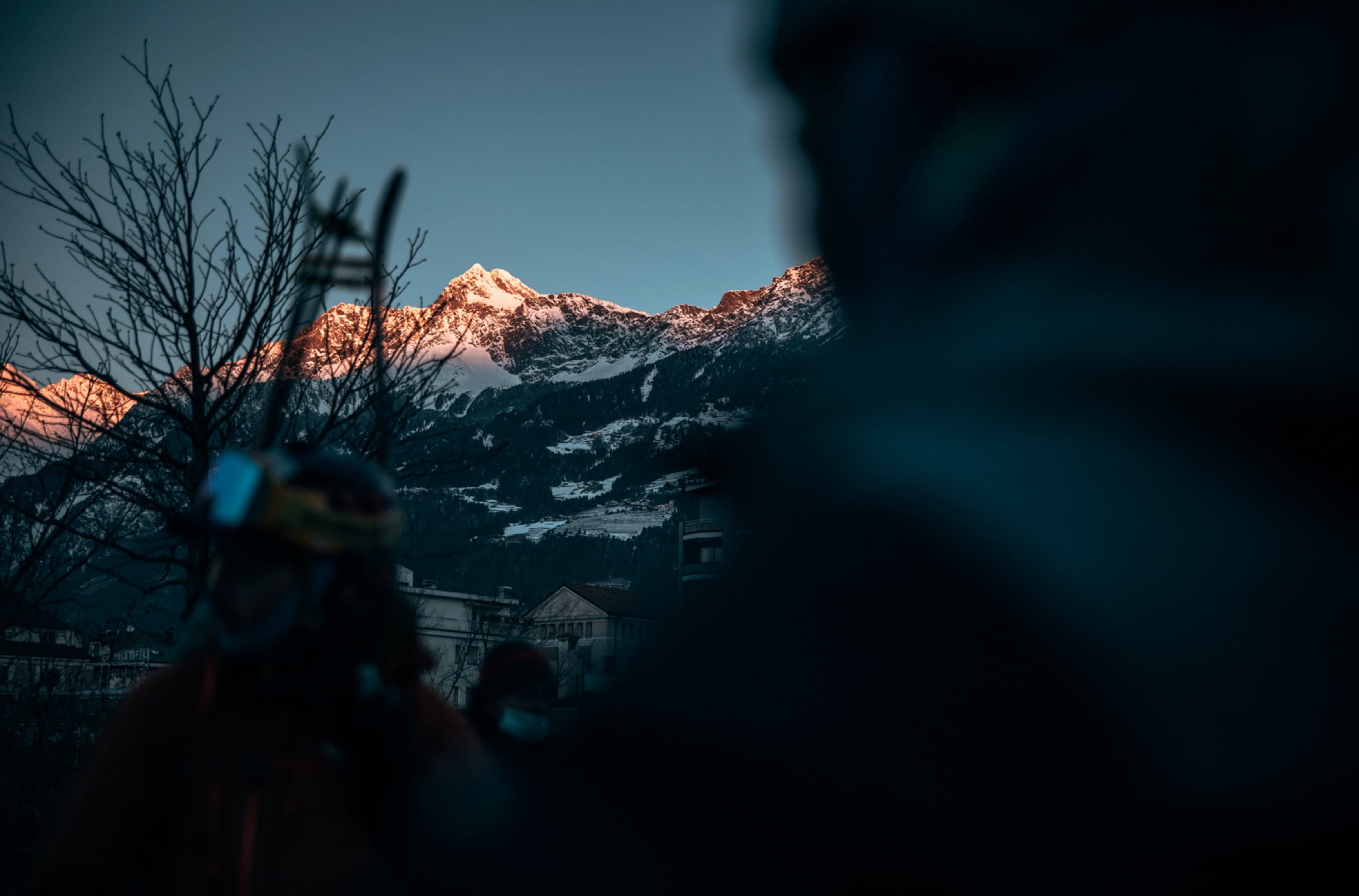 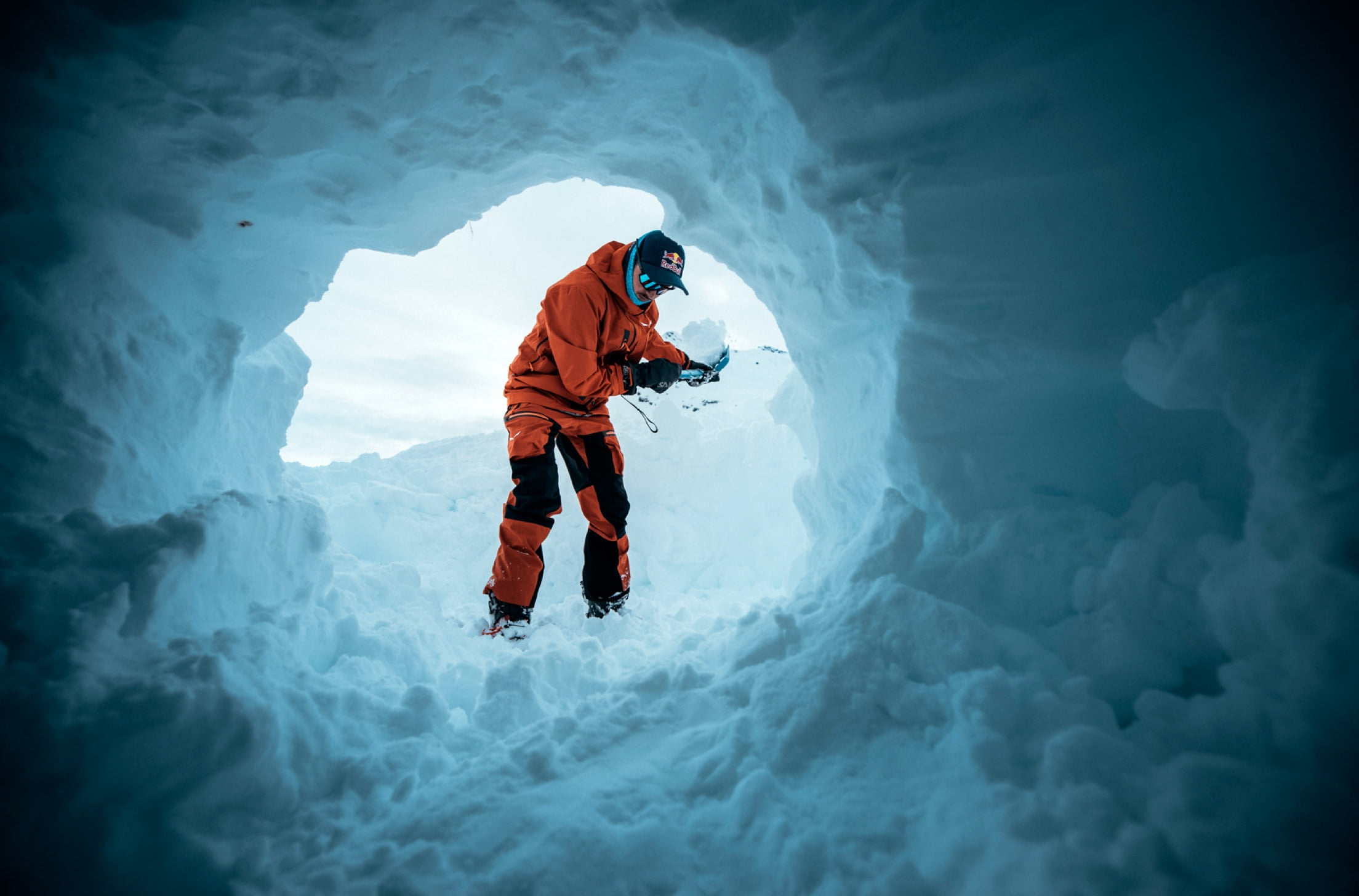 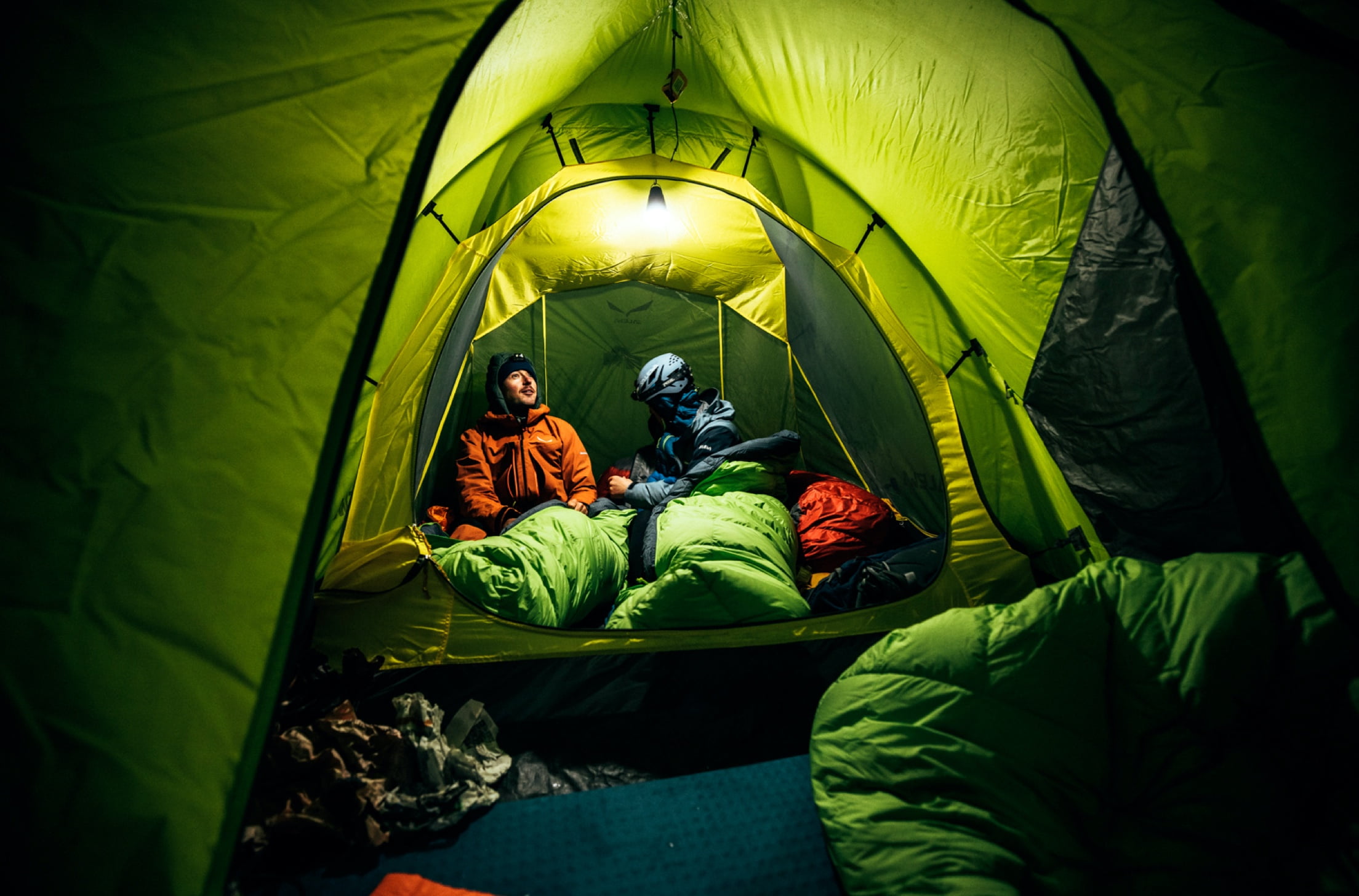 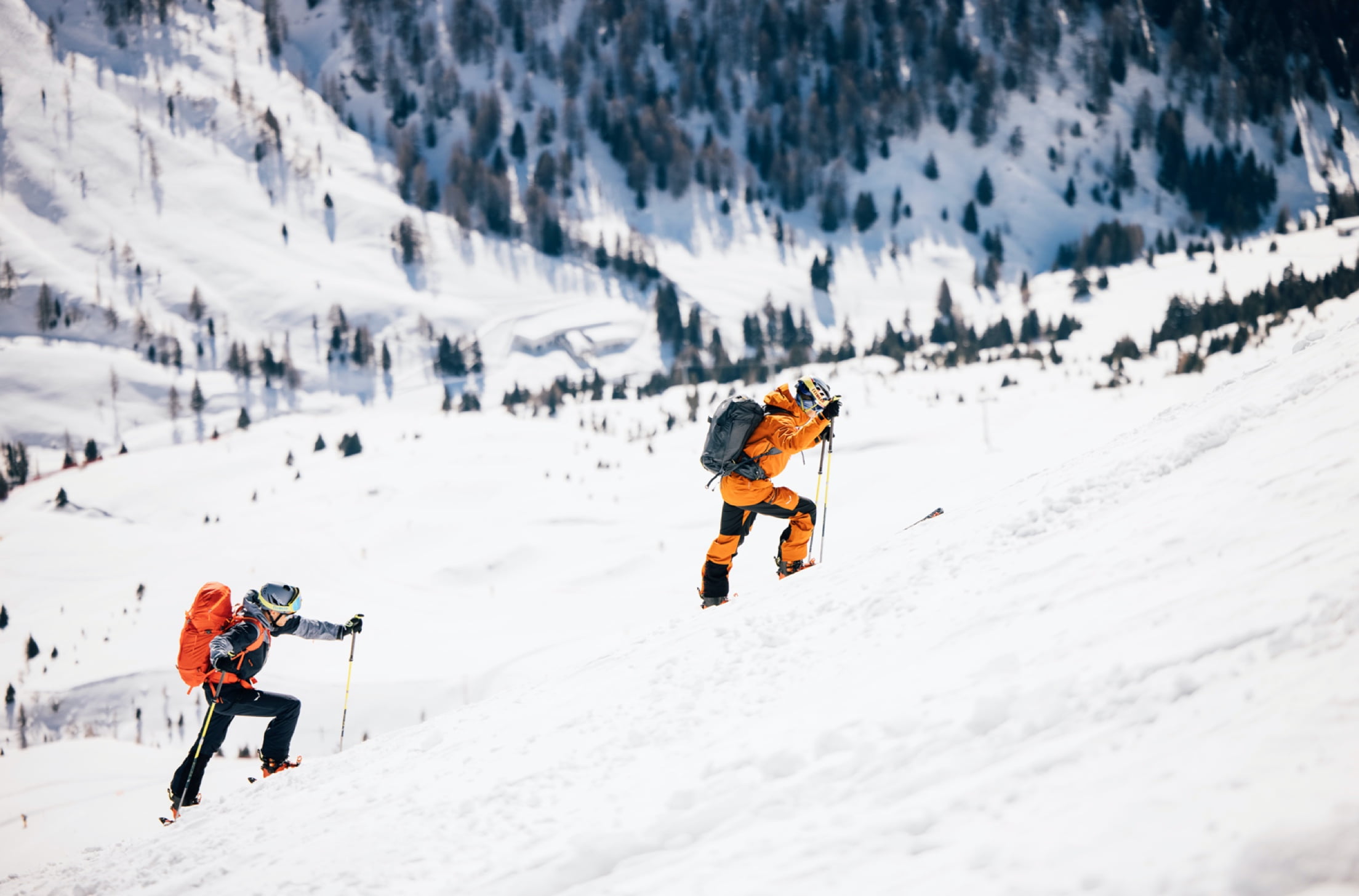 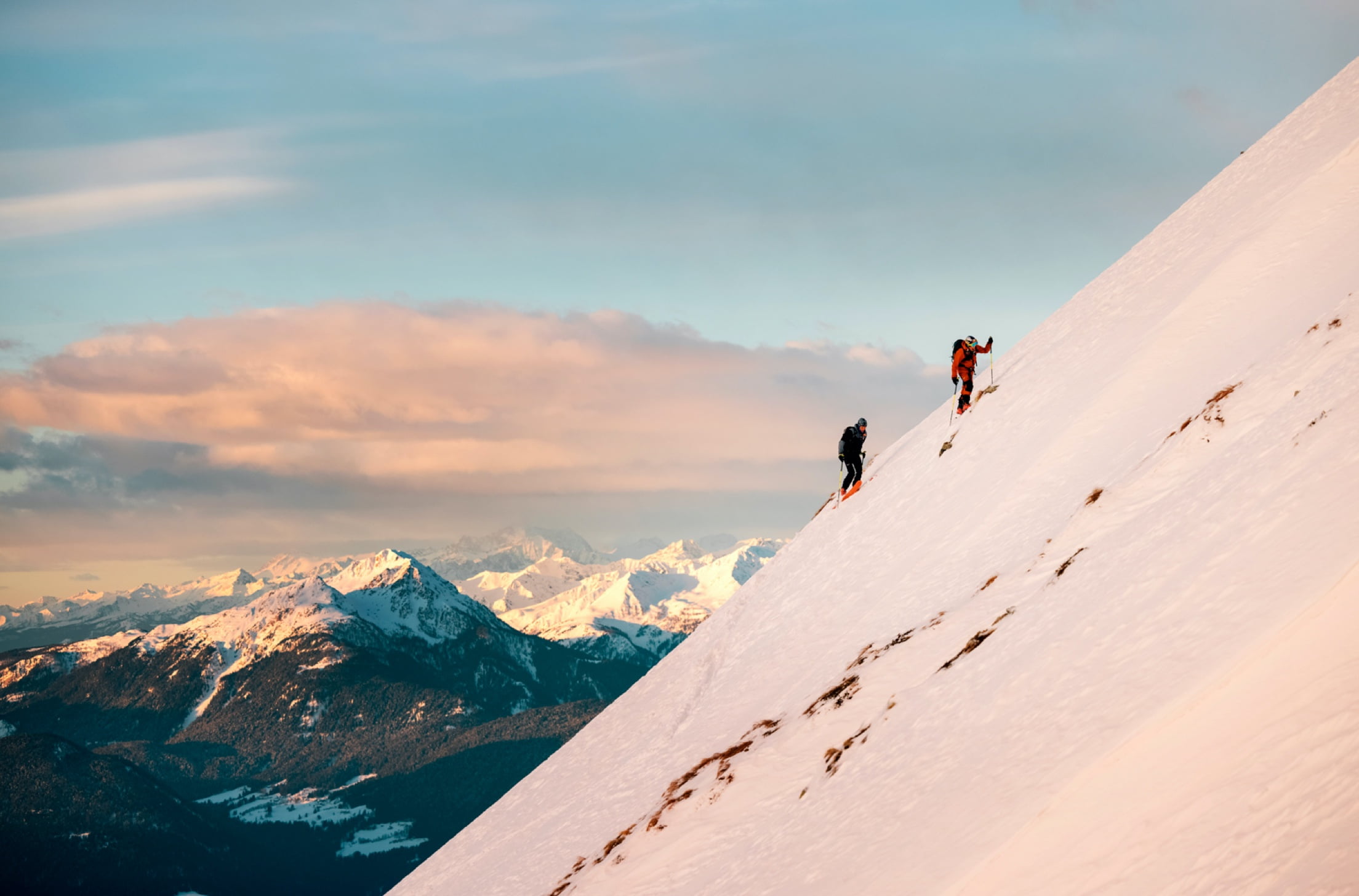 Throughout the month of October they went up to the Sopranes Lakes several times, in the Gruppo di Tessa Nature Park. A way to keep fit and set up base camp little by little.

The idea that stemmed in a state of semi-sleep, took shape in the project Winter Home, a fixed base camp in the mountains above the house, from which you can ski all routes imaginable. Each time they carried 10-kilo backpacks and paragliders to get back in faster. Now everything is at high altitude, protected under a boulder. There are cylinders, a stove, a tent and some provisions. Yet when they arrive at high altitude it seems to be on the moon. There is no trace of that four-metre boulder, it is all flat. Perhaps you can see a chimney. Will it be this one? The beginning of the pandemic winter coincides with the whitest season since snow falls were recorded and setting up the base camp is more difficult than expected. 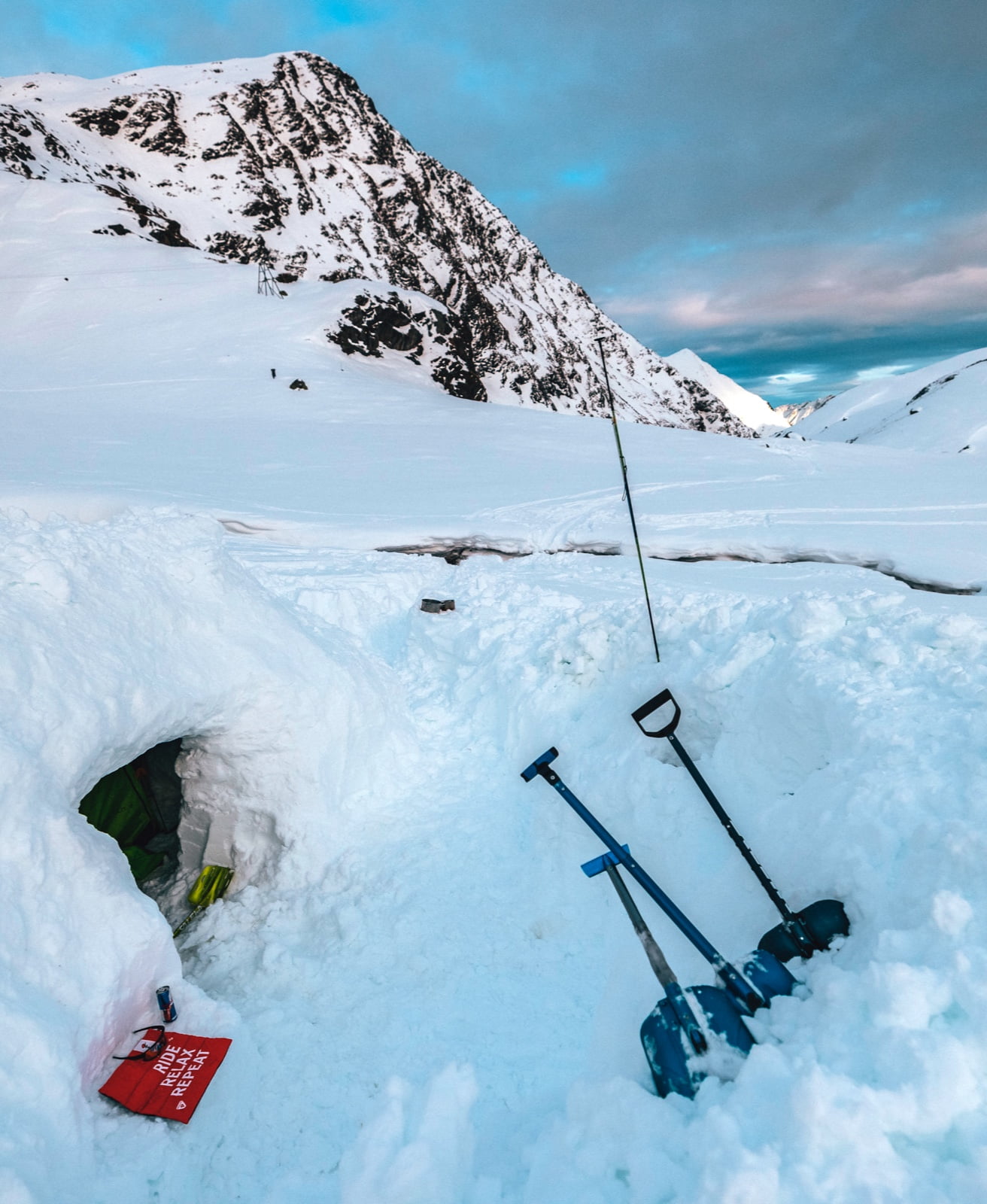 Aaron's initial idea is to set up the large tent inside an igloo, so that the temperature does not drop below freezing. So, together with Matthias, he works hard shoveling snow and making big blocks.

Aaron and Matthias are not Eskimos and do not know that following construction, they should settle down. So that mighty time slowly descends. There is no way to leave the tent inside, but at least it can become an excellent cellar. Impossible to dwell on all the frames of the last six months. Aaron and Matthias slept in their winter cottage for a total of thirty nights. Sometimes a hit and run, other times three or four days of work-vacation. So many memories, but there are two moments crystallised in Aaron's mind.

Two moments lived with as many companions, because a home means hospitality and Winter Home has been open all winter to those who share the same passion as Aaron and Matthias.

The start from a long sharp ridge, then a first steep part and in the middle a rock jump to be overcome by opening the paraglider, in speed riding, then again a large and gentle slope where you can play with curves in the air and on the snow. The perfect descent, not even one like in dreams or in video games. And then the Ivigna, the mountain above Merano 2000, the first steep descent skied by Aaaron, the one where uncle Renato met Heini Holzer. This time shared with Matthias. 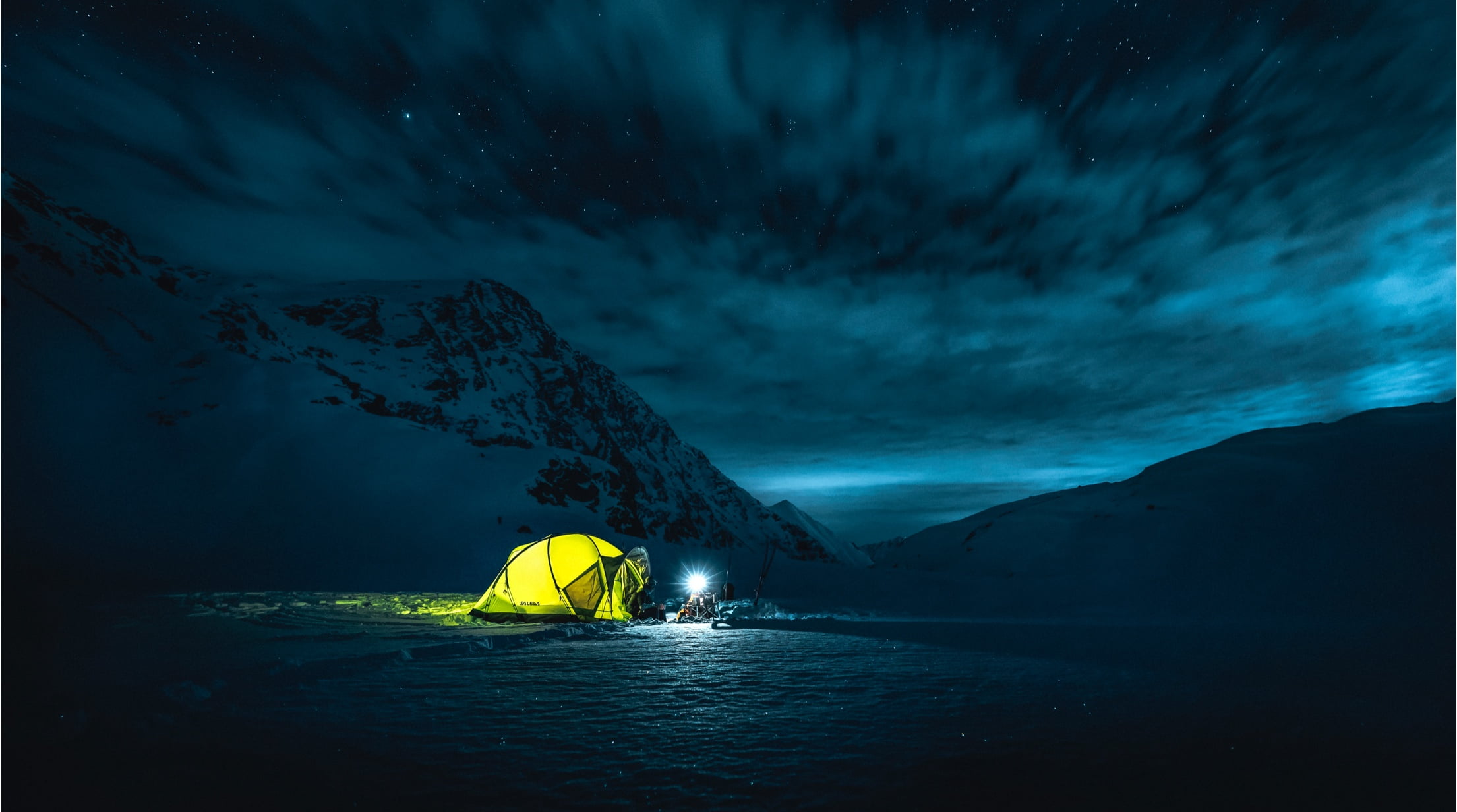 However, as the days go by, the vault goes down more and more and the idea of having those heavy blocks collapse like boulders on your head or on your precious provisions is not the best. The base camp is reduced to the tent, very spacious and comfortable.

"In the entirety of the winter, a maximum of thirty ski mountaineers will have passed, putting up a tent at the Sopranes Lakes allowed us to discover a wild area like the most distant places in the world" says Aaron thinking back to those long months between 2020 and 2021. 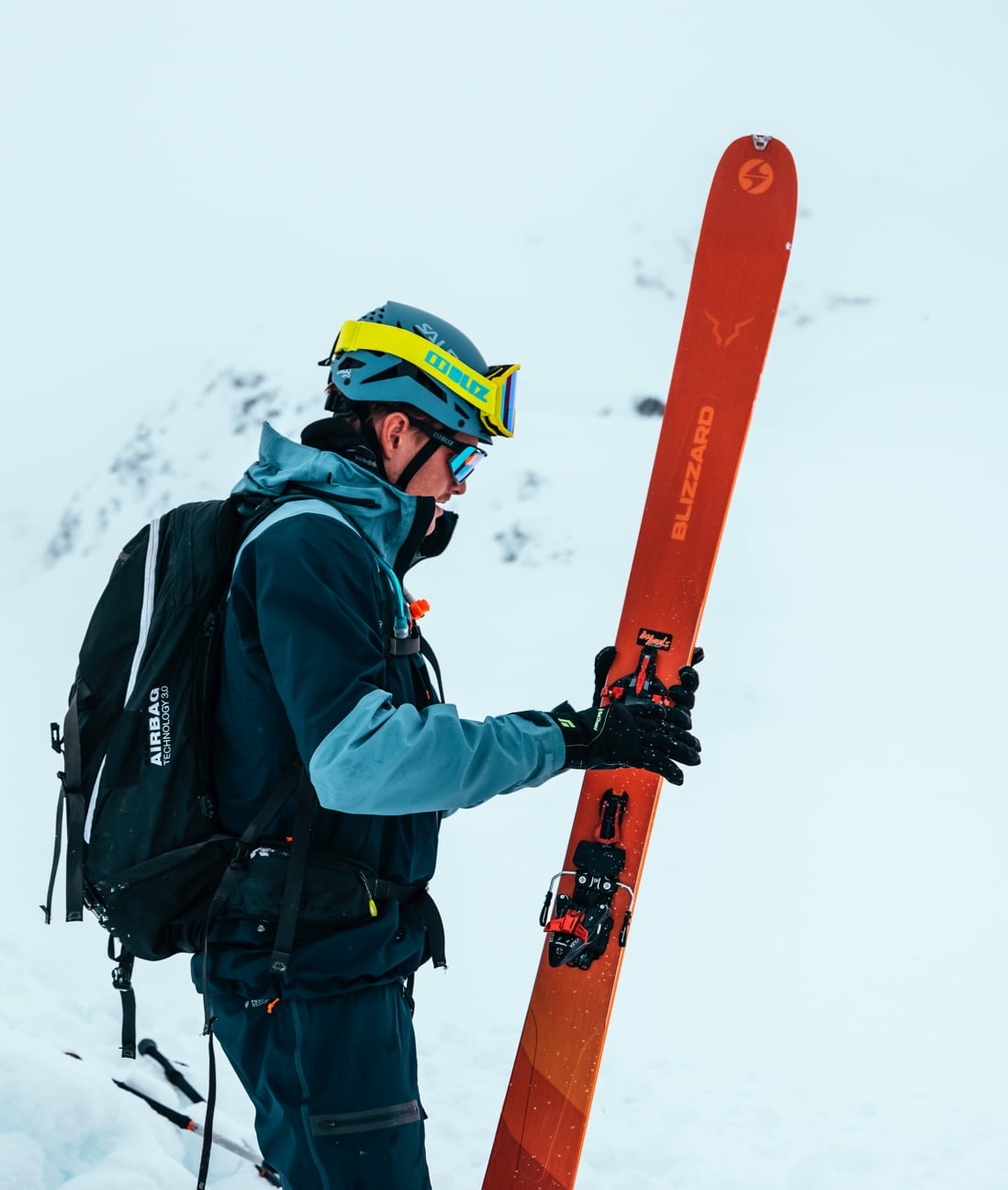 The reason why the Gruppo di Tessa is so little frequented, is the result of a simple equation: the snow limit is often between 1,300 and 1,500 metres, the last road ends at 650 metres. "To start having fun, you have to do 1,700 metres," Aaron says.

Having a base, a ski lodge, at 2,100 metres, allows you to set out every day to discover a new route, climbing up to 3,400 metres. "The Merano area is quite windy and usually the snow changes quickly and some slopes become dangerous, but for the whole first part of winter the conditions were wonderful". 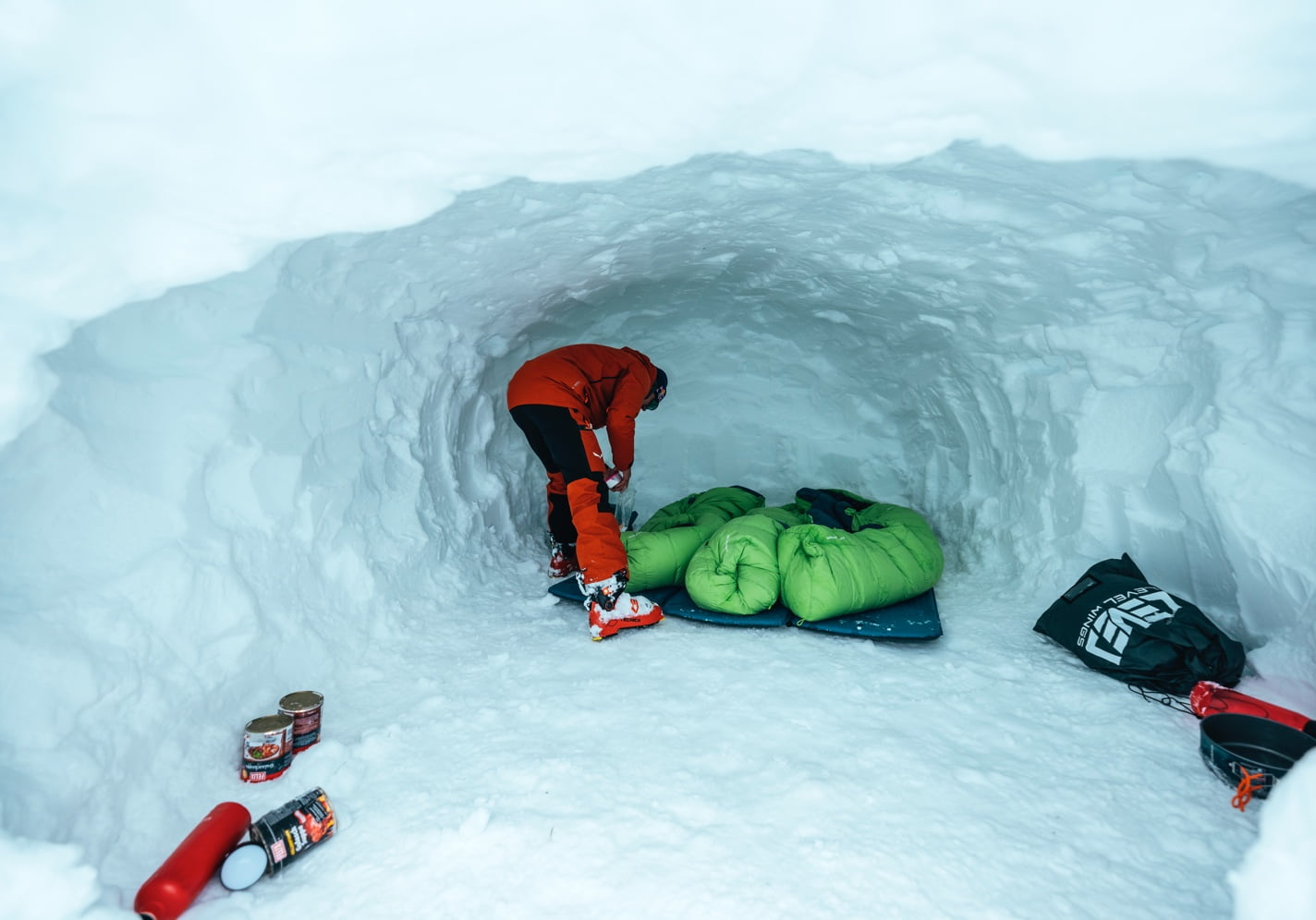 February 2021. The avalanche bulletin states danger five. Aaron has set up the tent where the edge of the lake is found in the summer. All around a basin drawn with a compass. The nearest slope will be, in Spans, 500 metres away. It's the best, safest place. But with a risk of five, they don't put a foot outside of the house. 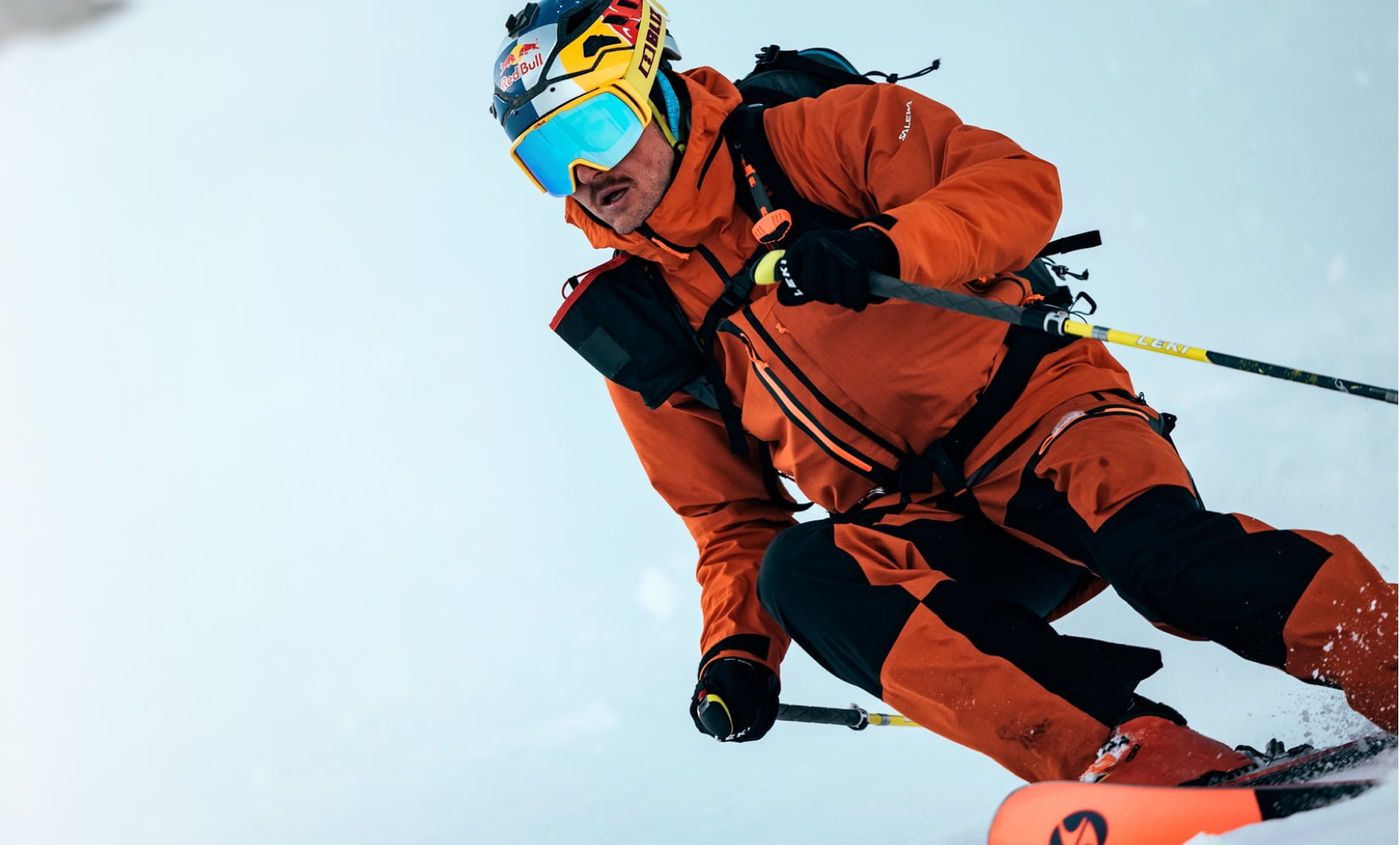 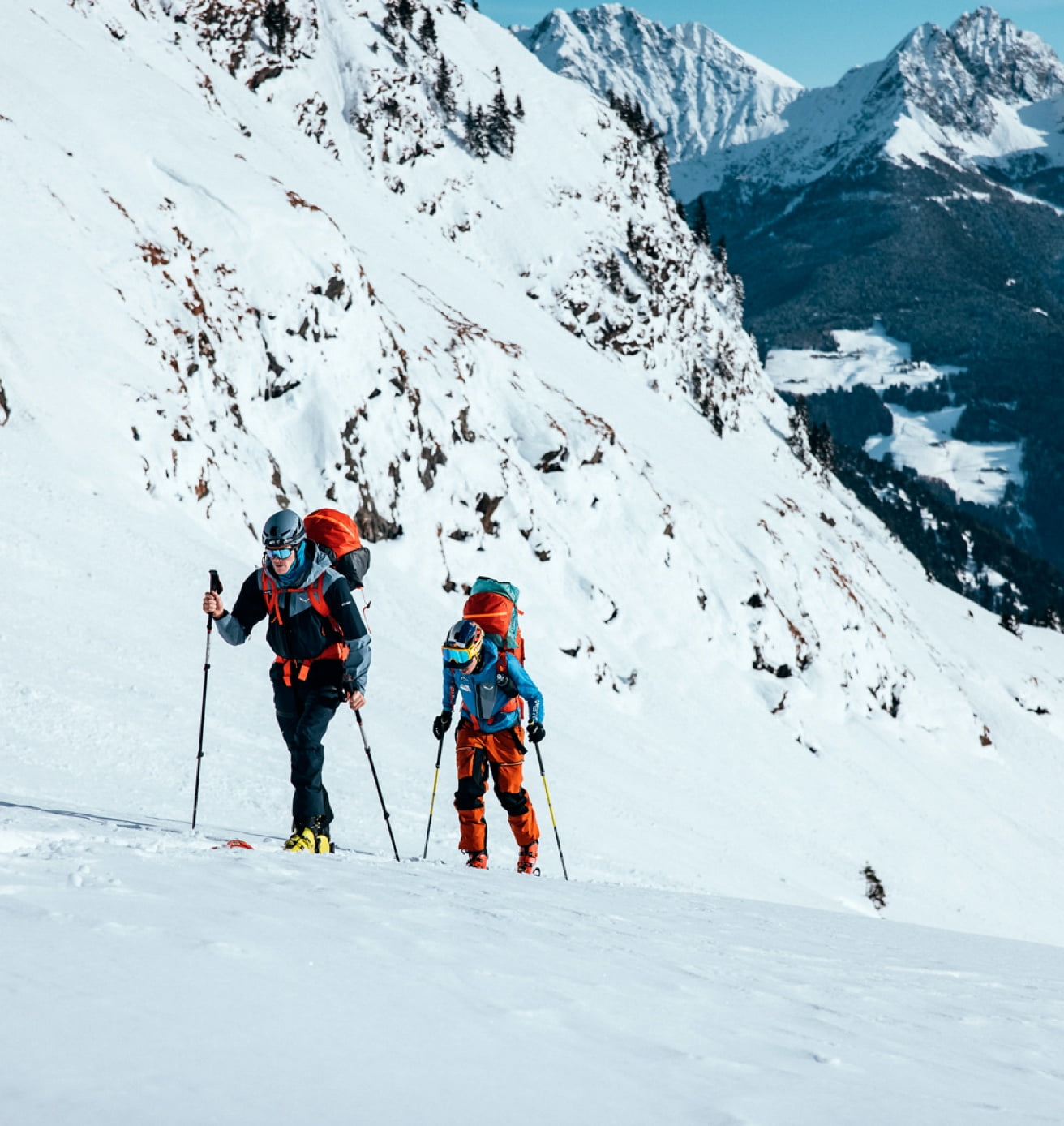 A rhombus envelops the basin. The whole 270-degree slope of that white blanket. When Aaron and Matthias go up to the lakes, there is no trace of the tent. It's an underwater world and they have to work a long time with probes and shovels to get it out.

Winter Home was reached by the last breath, the less powerful one, but it disappeared under the white blanket. The mountain has sent a signal, the spirit tells us to reassemble everything elsewhere. This time the choice falls on the area of Monte Hirzer, 2,781 metres to divide the Val Passiria from the Val Sarentino. "As the crow flies, it's a few kilometres, it's just across the valley," says Aaron. 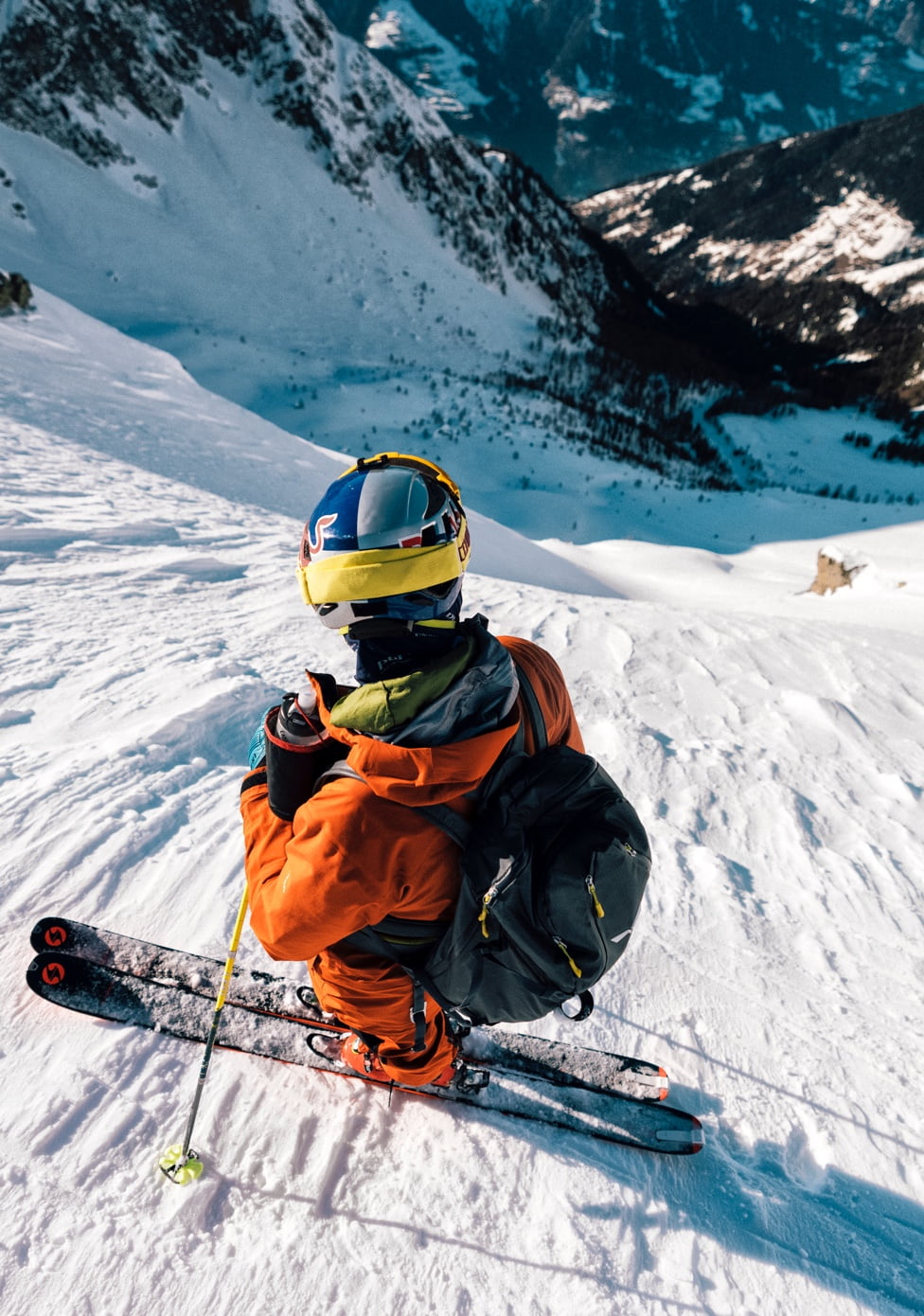 This time the two decide to go from Val Sarentino by car to be faster to get up and set up the new Winter Home. But then, to reach it, you only go up by fair means. By bike up to Tall, at 1,400 metres, and up to the summit in skins, at almost 2,800 metres, finally down with a few kilos para-mountaineering sail and a light harness. "Looking back, it was a struggle, but it was worth it because it allowed us to explore another area."

It’s always like this. When you go on vacation, you pack your bags carefully, looking forward to every moment and every adventure. The details make the difference. When the holiday’s finish you just want to unpack them quickly and think about the next vacation.

A ride with a few friends was enough to disassemble Winter Home, in late May. Paragliding backpacks of 150 litres on the shoulders and down to the valley like Sherpas, all together. Because the good things in life are to be lived with friends. Like those evenings to see the sunset and talk about skiing, that red disc of the sun that pierces the door of the tent in the morning, the hot soup after a cold day, the speck and the parmesan, the sound of snow under the skins, the breath of the deep dust, the grinding of the fox's teeth cleaning the just eaten chicken bone. 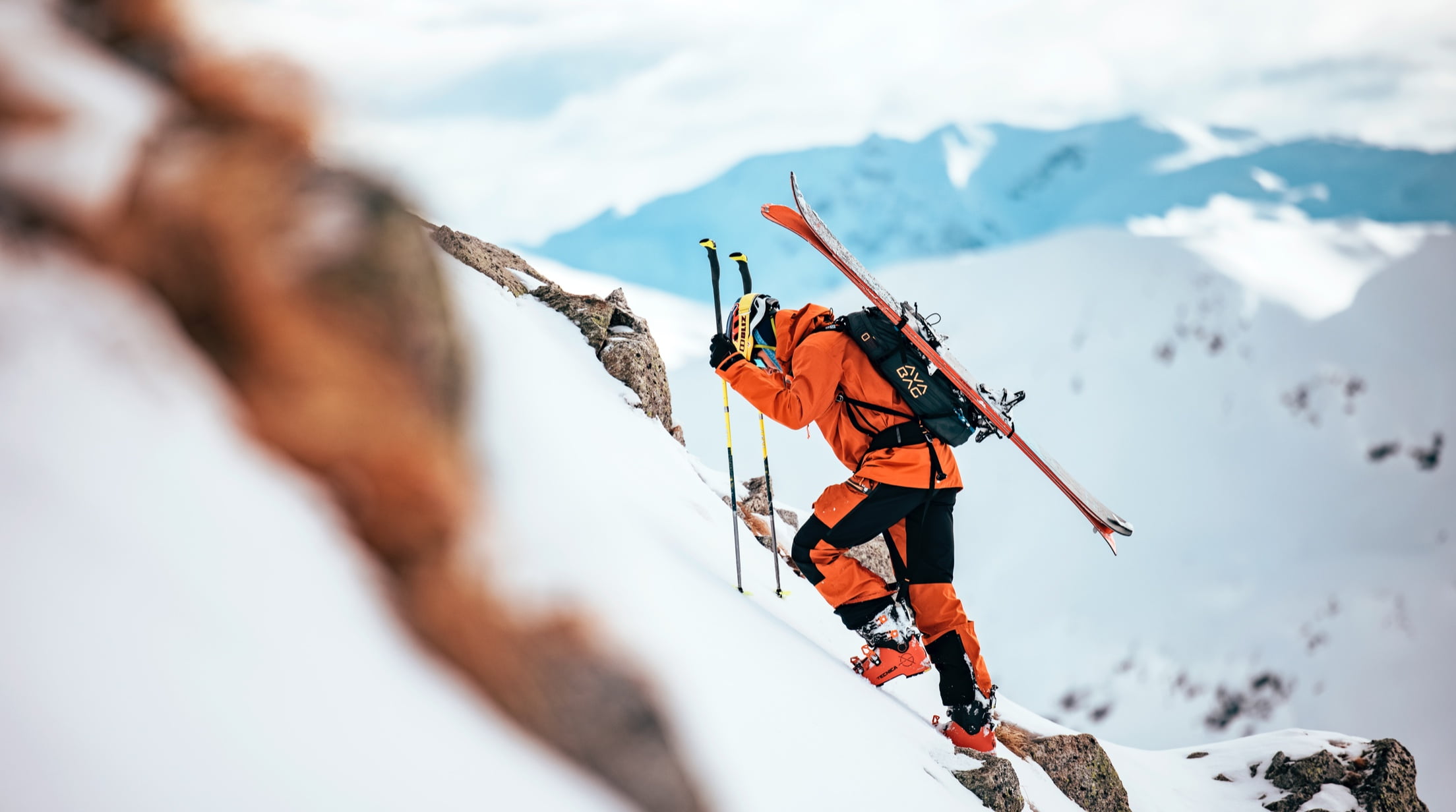